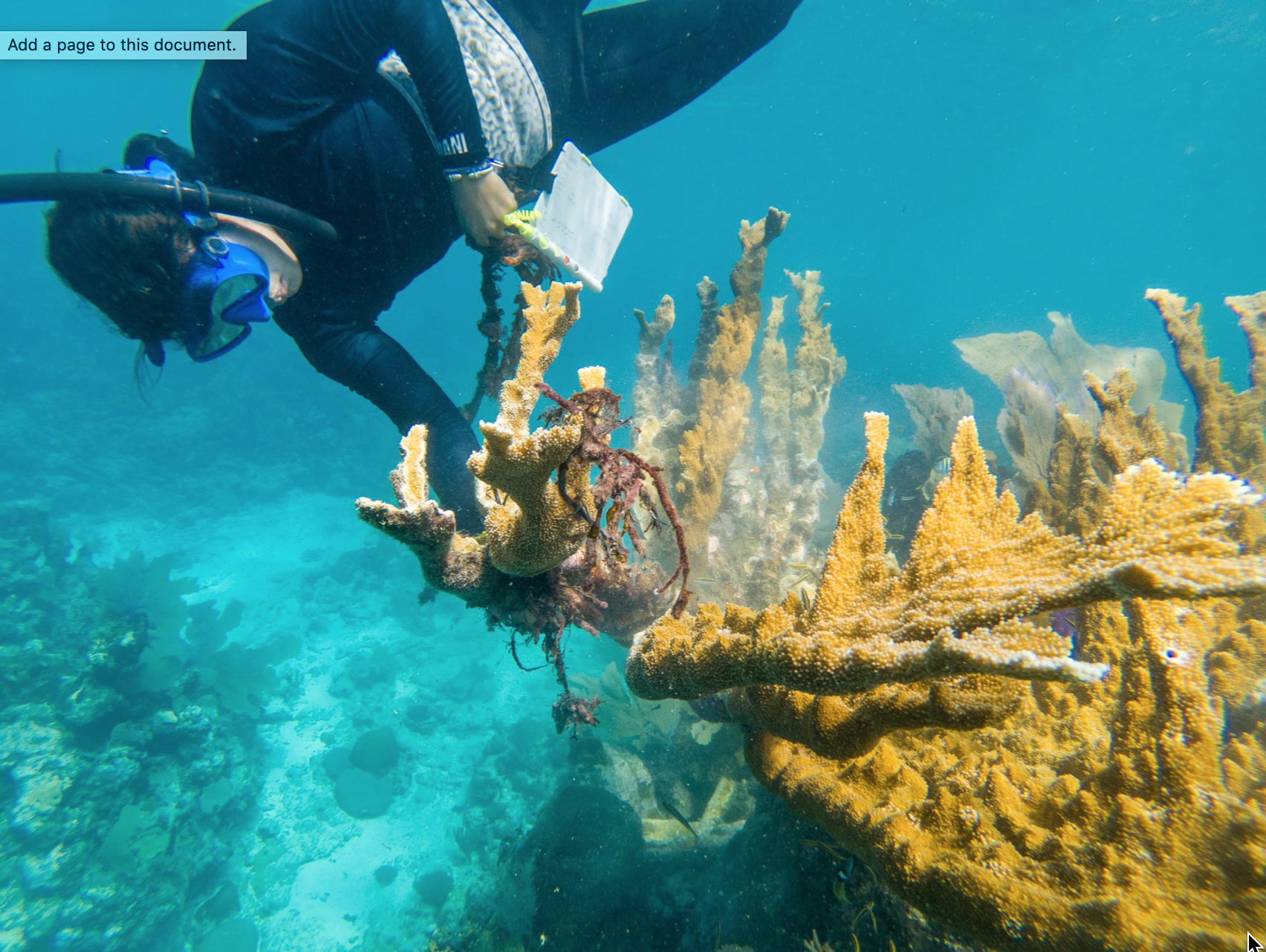 I always love imagining the ocean as it was many decades ago. In my mind, there is so much abundance, beauty, and undiscovered bountifulness lying beneath the surface. There are coral reefs bursting with life, color, textures, and sounds.

One thing is certain, the ocean is still beautiful today. Simply, the reality is that in most places, a vibrant ocean is a thing of the past. In other parts of the ocean, the abundance is completely gone.

As a diver and scientist, my work is tied to coral reefs. Beyond work, however, I have grown up learning about reefs, exploring them, and being eternally fascinated by all their mysteries and creatures. I’m grateful and count myself lucky that I caught a glimpse of the ocean in its glory. Through the years I have learned to notice the subtle changes others aren’t privy to. What I know for certain about our ocean and its reefs, is that they are desperately calling out for help as they vanish in front of our eyes. There are so many factors causing the decline of reefs worldwide, but most visibly, there is plastic pollution.

Plastic pollution has become the number one culprit when it comes to marine ecosystem damage, and marine life mortality everywhere. Studies estimate that plastics make up 70% of marine litter in some areas. Although larger bits of plastic are of great concern, the breakdown of these into micro or nanoplastics is the most worrisome due to their ubiquity in the marine environment. Once microplastics are ingested, they can be transferred through the food web with ease.

Most of the imagery we associate with plastic pollution is of turtles, whales or birds suffering entanglements or ingesting bags and straws.  Although not as charming as baby turtles, corals are live animals that are crucial for the health of the ocean. Corals are responsible for creating the structure of reefs worldwide that supports 25% of all marine life.

Plastic pollution is taking a heavy toll on these amazing, colorful animals that are the basis of one of the most important ecosystems on Earth. Plastic can affect corals by changing their biological responses and habits, by smothering and intoxicating them, as well as by causing a higher prevalence of disease. All of these have long-term negative repercussions on various species of critical reef-building corals, and the entire marine life they help to support.

The most prevalent damage comes from plastic debris becoming entrapped on coral colonies due to their complex structures and texture. Once the plastic has attached to the coral it can stay there for a long time unless it is removed physically by someone, or until it breaks down into microplastics. While it is lodged on the coral colony it can cause all sorts of problems for that coral. Plastic that clings to the corals causes mortality by smothering the parts of the coral trapped underneath. Plastic debris causes abrasions and lesions, and also blocks the sunlight, impeding photosynthesis for the polyps trapped underneath. Other physical processes such as feeding or expulsion of waste are impeded due to the blockage. The more texture each coral has, the more trapped the plastic debris can get, making it nearly impossible for corals to remove it on their own. 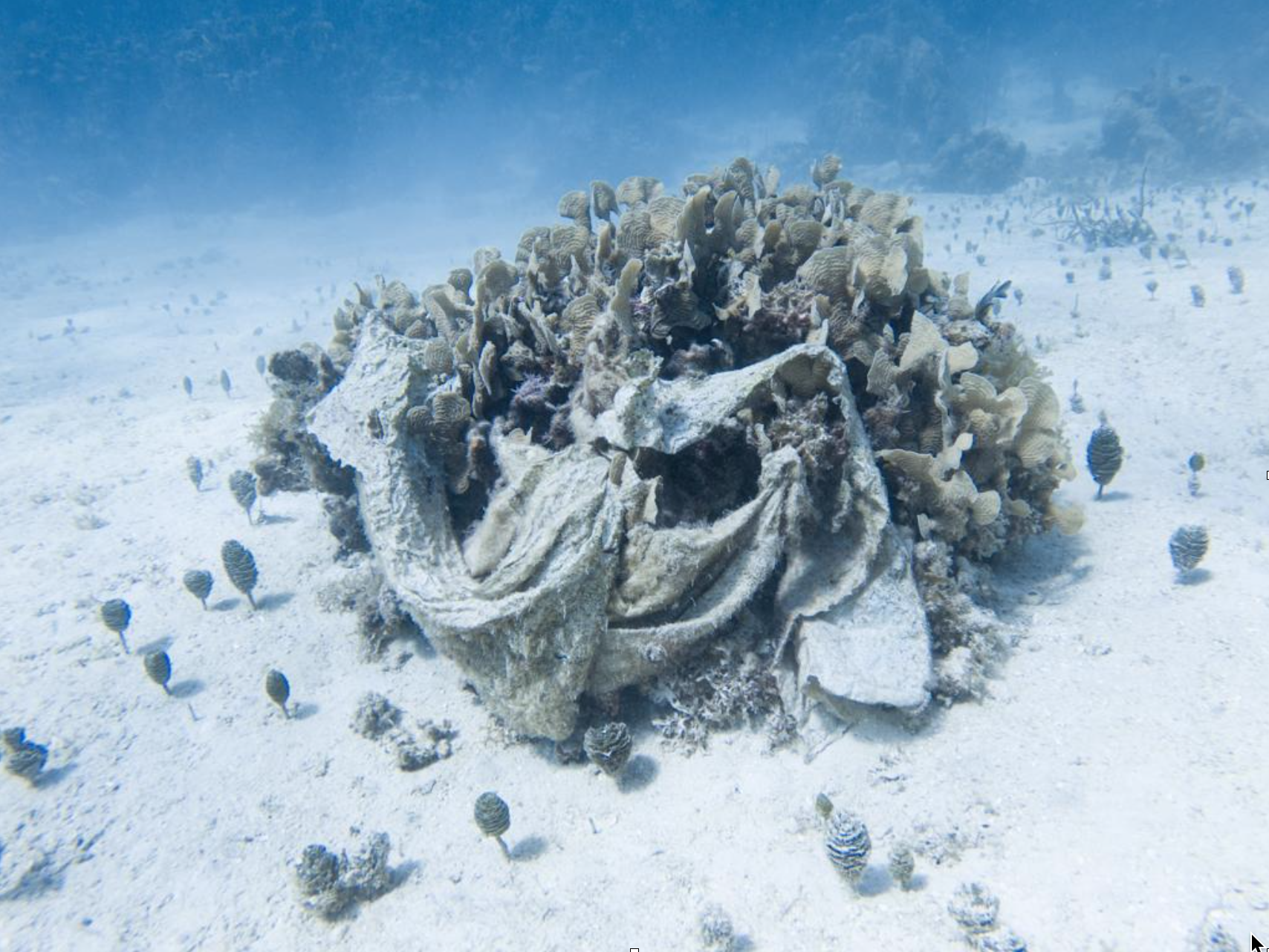 Once plastic debris has broken down into microplastics, it continues to wreak havoc. Scientists are studying the feeding habits of corals in diverse locations to understand whether they are ingesting plastic and if so, what is this causing. Up to 30% of the energy that corals need comes from floating food particles that they capture with their tentacles. Since plastic breaks down into small particles and floats in the water column, corals now have access to microplastics that they inadvertently capture, much like other animals. Unable to discern what is real food from what isn’t, corals can ingest plastic in quantities that are comparable to their real food. In fact, in the presence of prey (small plankton and shrimp), corals are more likely to be eating microplastics. Corals are thus filling up on plastic, which has no nutritional value and causes missed opportunities for capturing real food. The result is corals do not fulfill their daily energy requirements which can mark a stark difference between staying healthy and carrying out their reproductive cycles, or dying.

There are studies that show that not only are corals increasing their accidental uptake of plastic, but in fact, they seem to prefer certain plastics over even their real food. Additives and other ingredients used in manufacturing seem to make plastic “tasty” for coral. It can even be equated to human consumption of fast food, where we ingest food with little or no nutritional value, that can cause short and long term health problems. The most significant problem with plastic intake is the coral polyp is unable to acquire the sufficient energy to carry out coral calcification, and thus growth rates are severely diminished. 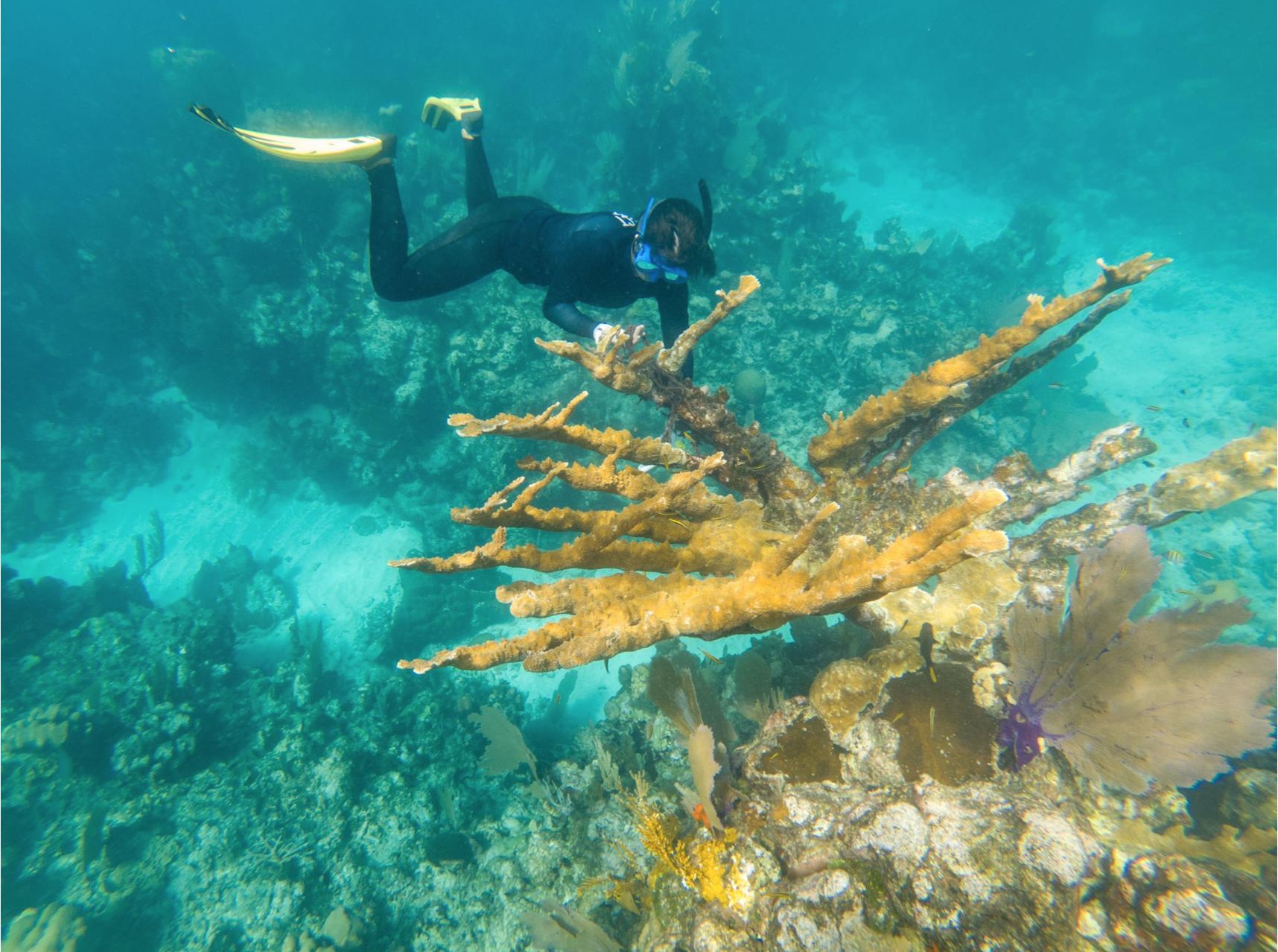 There are multiple repercussions to plastic consumption besides the reduced energy intake, including permanent tissue damage, impairment of food digestion and nutrient intake, as well as increased incidence of many coral diseases.

Another problem with plastic debris in the ocean is the surface of those microplastics can become saturated with bacteria, many of which can become pathogens that cause coral disease. Scientists have discovered that the risk of disease can be 22 times greater on reefs that are polluted by plastic, compared to cleaner reefs. The risk and mortality caused by diseases seems to be higher on those coral species whose shapes cause them to retain more debris. Coral diseases are one of the greatest driving forces of declining reef health and driving coral mortality. As they become more prevalent thanks to plastic pollution, many reef areas are experiencing greater losses in coral cover.

If plastic debris is one of the major contributors of reef degradation, it is completely in our power to make the changes necessary to combat it. It also means that you don’t have to be a hardcore environmentalist, or a diver to participate in the fight against plastic pollution. Reducing or completely eliminating your use of plastic is the best way to help protect coral reefs. The second best way is participating in clean-ups.

If you are participating in clean-ups, especially underwater, Trshbg is a super helpful tool for anyone. Whether a diver, snorkeler or just a casual visitor to the beach, you can use your Trshbg to collect this plastic debris, and help remove some stress corals are facing.

Although picking up one piece of plastic may often feel futile, or as if you are not really changing anything, that one piece will eventually become a million nearly invisible pieces that will become food particles for corals and other small animals. Not only will that kill them but it will then be part of the food chain that you and I share with everything else in nature. 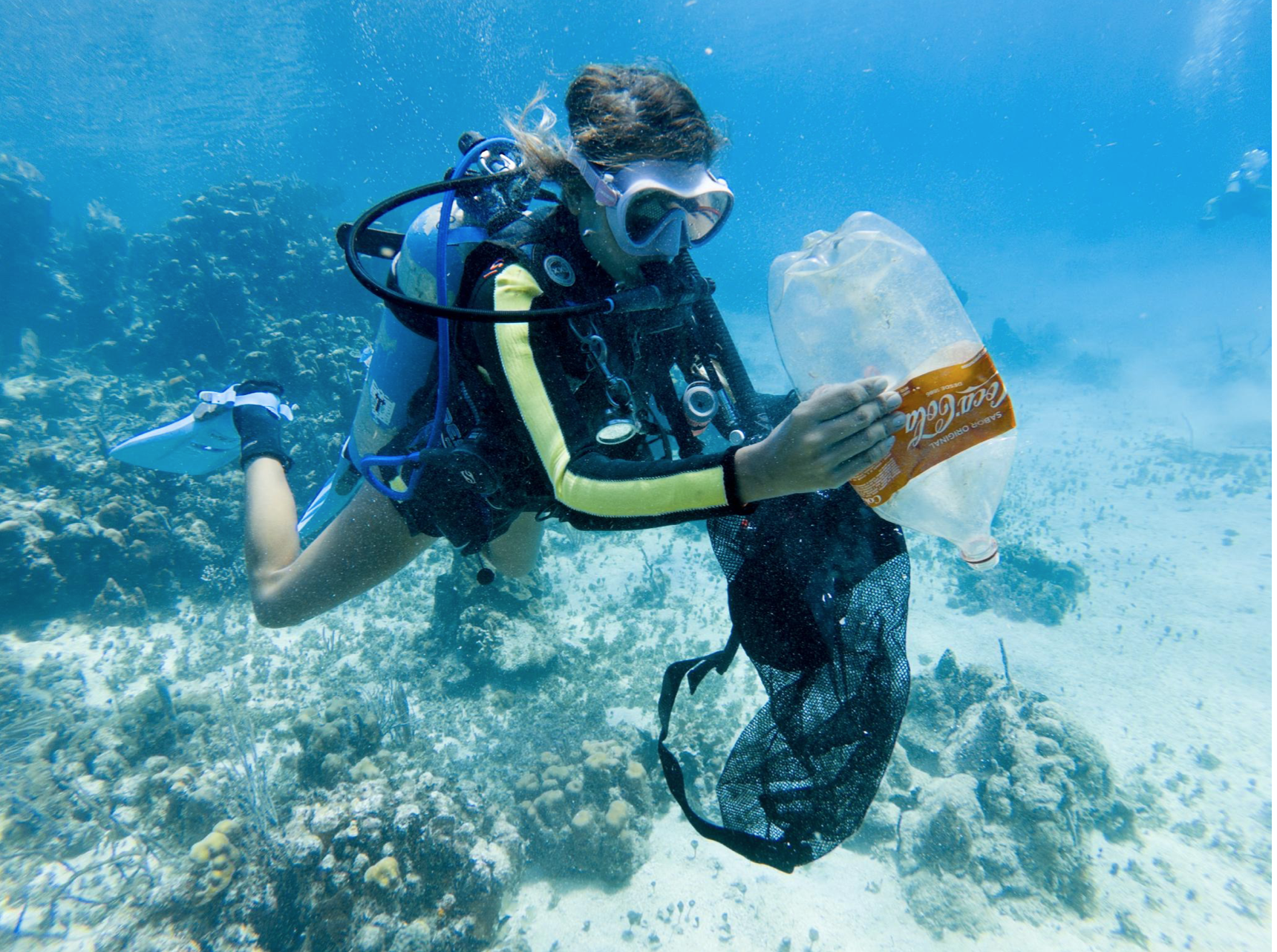 Writer bio – Daniela Mejia (Dani) is from Honduras, she is a Marine Scientist and PADI IDC Staff Instructor specializing in coral restoration and coral health. She currently is the Executive Director and Founder of the Utila Coral Restoration project, located in Utila, Honduras. There she dedicates her time to educating people on the importance of corals, and their health. She also works to restore endangered populations of corals and collaborates on a national and international basis to help strengthen and develop methodologies for restoration on a regional level. Her dream is to set up a lab in Honduras where national and foreign scientists can conduct important research to help drive policymakers and communities to prioritize the reef’s health.

Any cookies that may not be particularly necessary for the website to function and is used specifically to collect user personal data via analytics, ads, other embedded contents are termed as non-necessary cookies. It is mandatory to procure user consent prior to running these cookies on your website.